The Studio Work
by Elise Morris

Ann Weber's sculptures are often larger than life, and every one I've had the chance to see leaves a lasting impression. "I love the idea of making something from nothing, and how one can create beauty from such a mundane material." In her never-ending quest to push her work forward ("I don’t really think about limitations."), she has chosen to tackle the expanse of Los Angeles, create new work and forge new connections. 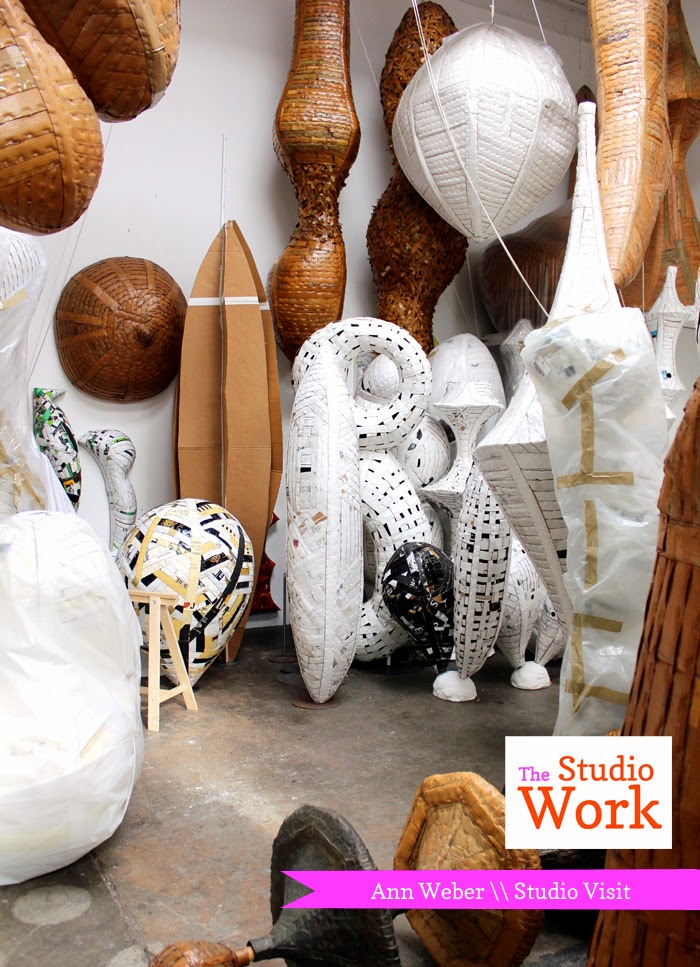 Your forms are at once light, airy, solid and substantial; both architectural and very organic – where do they come from? Is your process intuitive or do you have a shape in mind when you begin a piece? 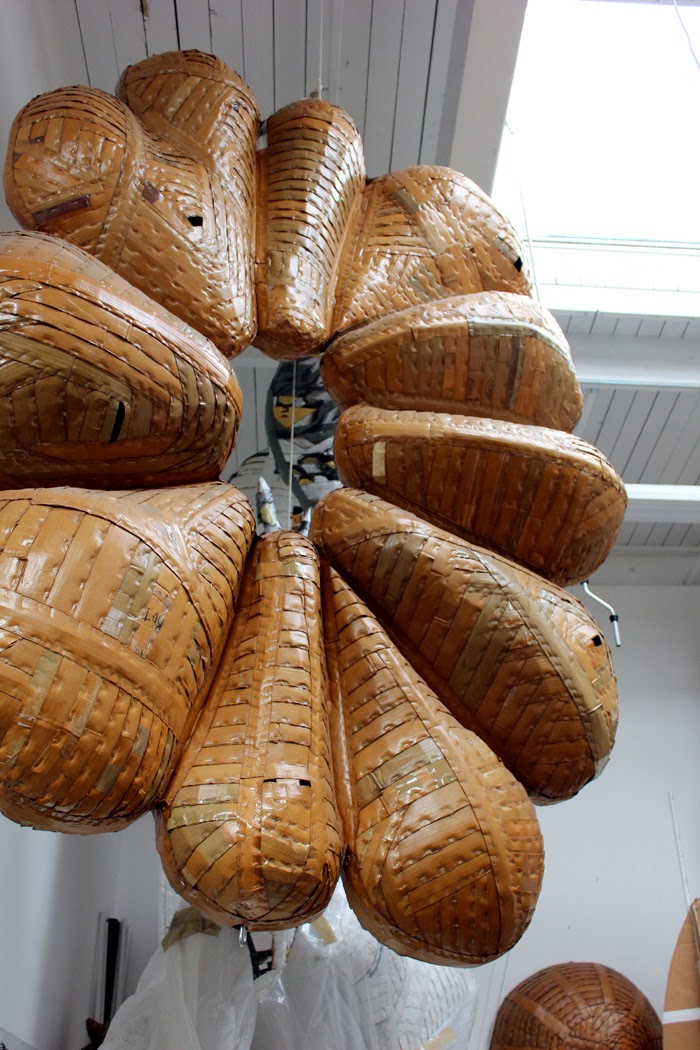 My sculptures pay homage to other artists such as the sculptor, Gian Carlo Berninin, Brancusi, Eva Hesse, the two Louise’s (Nevelson and Bourgeois), artists from the Italian Arte Povera Movement such as Michaelangelo Pistoletto and Martin Puryear. I make simple forms that reference specific events in life. My sculptures are metaphors for life experiences such as balancing acts, or how tall I can make something before it collapses.

One series of work was about a four day love affair in Rome. Another series evolved out of a period of obstacles that I went through. I created a group of sculptures called Personages to represent all the people who helped me get through that time. I had no idea so many people loved me. As I created the armature for a sculpture, the next piece evolved from the piece before it. This metaphor reflects how each one of us is so connected to the other. And the whole world is like this. 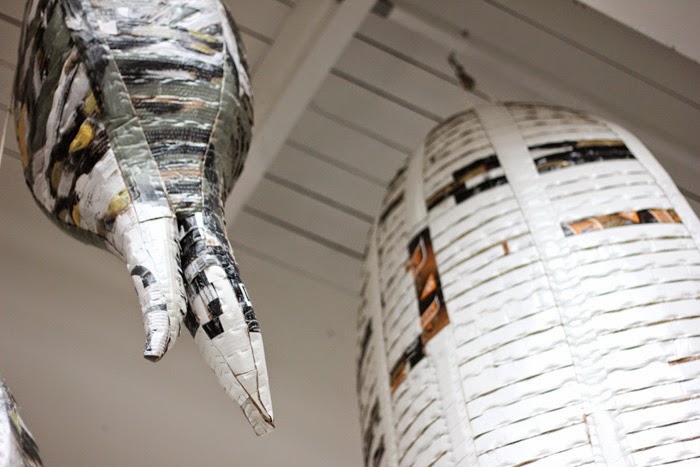 How have your materials changed since you started working with cardboard in a sculptural way?

I just got better at it after putting in my 10,000 hours. When I first started working with cardboard, I had been experimenting with a lot of different materials. Following graduate school at California College of Arts and Crafts, Viola Frey was my mentor in the ceramics department, I knew I wasn’t going to set up a pottery studio. It was too expensive, plus I wanted to get out from under the onus of clay and whether or not it was a fine art material. Did I think that trading cardboard in for clay was going to elevate my sculpture to the fine art field? No, but I also thought that cardboard was just another material to experiment with. Much as the Italian artists such as Michaelangelo, Pistoletto and others of the Arte Povera movement experimented with cardboard and newspapers, I was interested in the possibilities of alternative materials.

I have been using cardboard since 1992 when I moved to a new studio in East Oakland. There was a big pile of cardboard boxes in the middle of the studio after I moved in. I started thinking about how architect, Frank Gehry used cardboard to create chairs and decided to try making sculpture from it. I found that an Arrow P-22 stapler, from Ace Hardware, could staple together strips of cardboard to make large forms and I have never looked back. I love the idea of making something from nothing, and how one can create beauty from such a mundane material. I am from the mid-west and cardboard suits my mid-western sensibility of being resourceful. 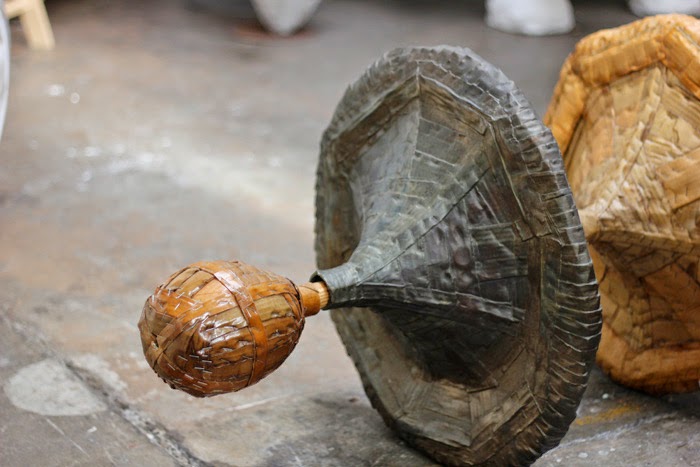 Being involved in the art community seems to have played a big role in your career – can you share some insight you’ve gained through those relationships?

Artists work in isolation, there’s no getting around it. One of the joys of graduate school was to have a studio space surrounded by other artists. I loved the interaction and the pressure of being in the middle of productivity. But I also felt ready to have my own space to work after I graduated.

In order to cultivate attention for my work I felt it was important to participate in the culture of my community. I participated in Pro Arts Open studio because I did not have any shows so I created a body of work and installed it professionally in my studio, had an opening and sent out announcements. I joined the CCAC Alumni committee and helped organize shows. I joined the Pacific Rim Sculptors Group and became the person that contacted institutions about showing the work of our group. Through this I met Carrie Lederer, curator at the Bedford Gallery in Walnut Creek. This contact resulted in a small show of my work in the lobby at the Bedford and then later a 3 person exhibiton in the gallery. Another exhibition of Pacific Rim Sculptors Group resulted at the ICA in San Jose where I met curator, Cathy Kimball. Since I was interested in public art, I joined an Advisory Council in Richmond to help establish a percent for art program there. I signed up to be a juror for a public art project in Oakland. An artist must stick their necks out of the studio and meet people in order to make things happen for yourself and your colleagues. 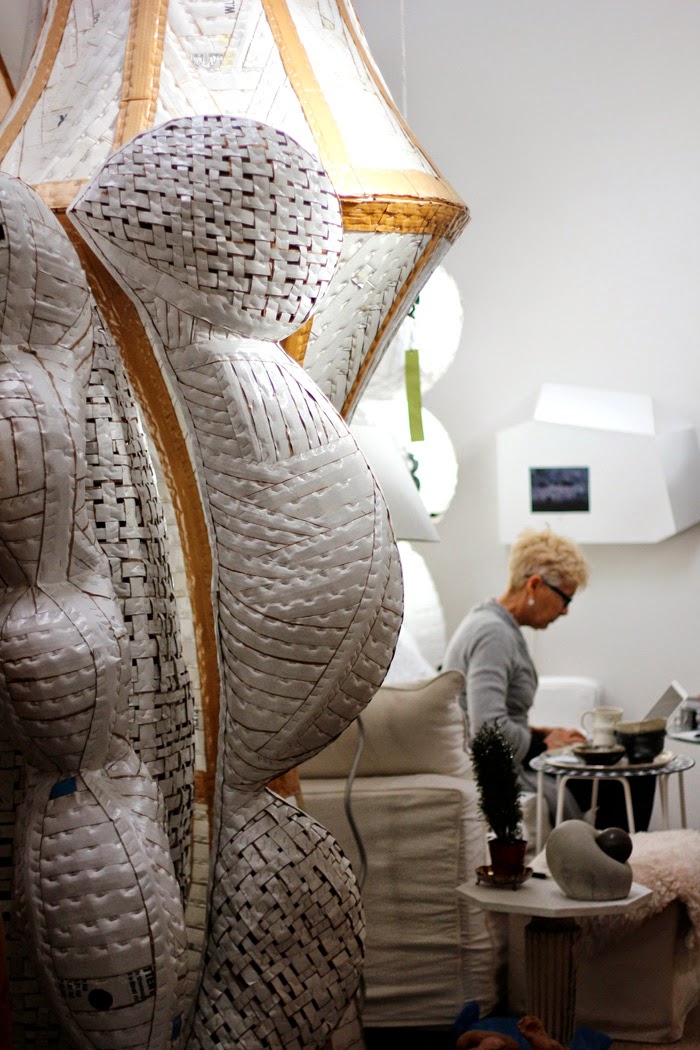 More recently I was able to move into the 45th Street Artist’s Cooperative in Emeryville. I am surrounded by approximately 50 working artists and art professionals. This has given me an affordable studio and peace of mind. It is inspiring to be part of this community and it enables me to thrive as an artist. I also have started two different support groups that meet bi-monthly. The most recent iteration involves 8 artists ranging from 24 to 64 in age. We mentor each other, set goals and hold each other accountable to those goals. It is immensely satisfying and we gain valuable insight and help from each other.

I also feel that I have built my career on dinner parties and thank you notes/presents. Richard Whittaker, editor of an important publication called Works & Conversation, and I hosted dinner parties where we each invited 3 people to meet for dinner in my studio. Many engaging conversations and contacts resulted from these our Dinners & Conversations. For a short time we organized Breakfast & Conversation at a local café open to any artist who wished to join us. 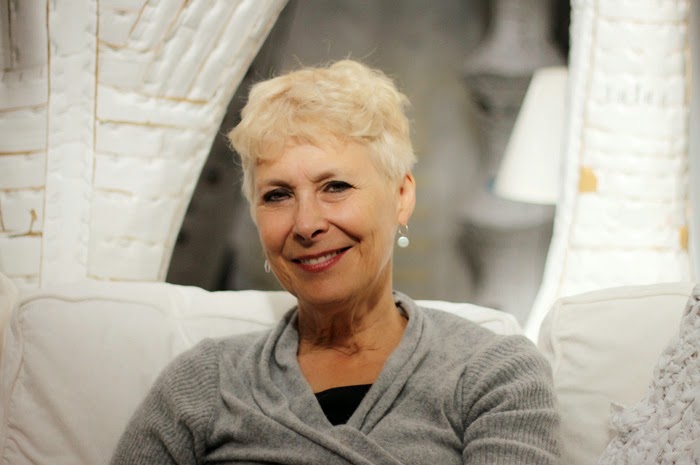 Showing gratitude and appreciation is also a great motivator for people to help you on the long road to getting recognized as a Bay Area, and beyond, artist.

I have sought out and applied for residencies such as American Academy in Rome, Visiting Artist program, Djerassi Resident Artist Program, Oberphalser Kunstlerhaus in Schwandorf, Germany, the International School in Beijing and recently, the Lux Art Institute in southern California. All of these have been invaluable sources for inspiration and enable me to pursue deeply various bodies of work. 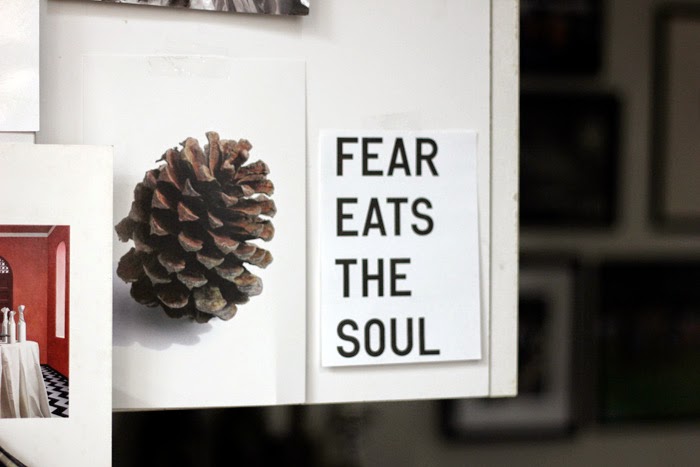 Last but not least, in fact, most importantly, I have always had a part time job to support my art practice. My art making does nothing but cost me money. Working part time at Creative Growth Art Center, an art center in Oakland for people with developmental disabilities, provided me with a livelihood but also brought me in contact with a community of hard working artists. Following that job I worked part time as an administrator at Berkeley Art Center, another extremely satisfying job that enabled me to work in the art field behind the scenes to promote artists, get me out of the studio and exercise many creative ideas to keep the place running. 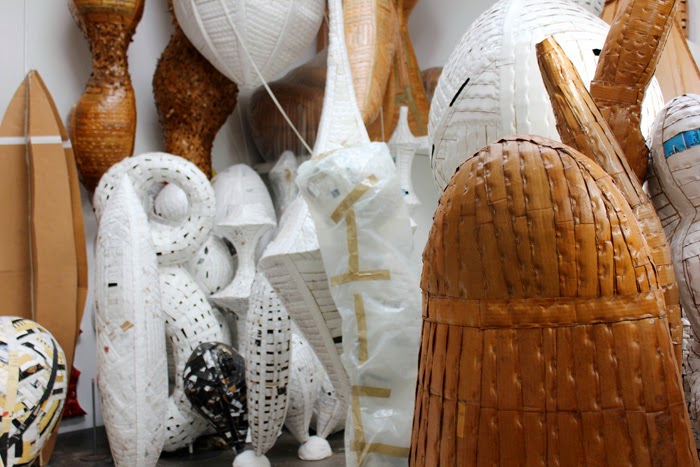 We talked about how you’re headed to LA to work for a year – in a way creating your own residency. Can you talk about that decision and what you hope to find?

My job at the Berkeley Art Center ended abruptly when I was 62, four years short of retirement and if Obamacare hadn’t happened I would have gone underwater. It is very difficult to find another part time job in my field at this age. So now I am pursuing alternative ways to sustain myself. I produced a catalog this year to promote a residency that I had in Beijing with the hope of attaining more residencies at various schools and universities. 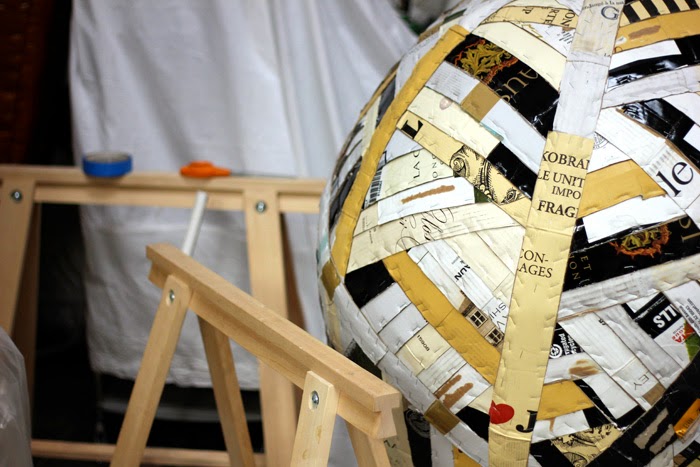 I am fortunate to have an extremely supportive relationship with a stellar gallery in San Francisco, Dolby Chadwick Gallery. Finally! Lisa Dolby Chadwick and staff have worked hard to promote my work. I am proud to be represented by her. I feel that by relocating to Los Angeles for a year I can seek out new opportunities for myself and the gallery to exhibit my work outside the Bay Area, create a new audience and possibly generate sales. Los Angeles is huge by comparison to the Bay Area. There is a lot of support for artists there and a huge community of artists, curators and collectors.

I have rented out my studio in Emeryville to an artist and a scholar and have found a space with a well-respected Los Angeles artist in his studio in San Pedro. I look forward to embarking on a new body of work in a new and exciting setting. 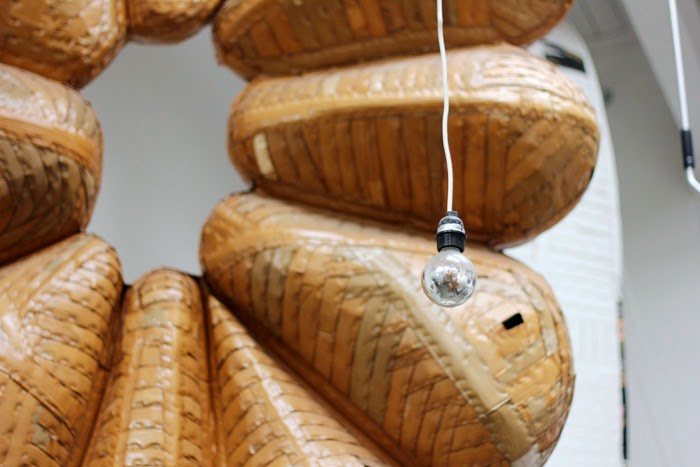 What is your dream project if time (or space for that matter) wasn’t a limit?

I live in the present. I don’t really think about limitations. I make what needs to be made regardless of whether or not I have the space for it. If I run out of floor space in the studio, I install pulleys and fill the air with hanging sculpture. If I need an empty studio, I apply for a residency and go, fill the space and leave it there. 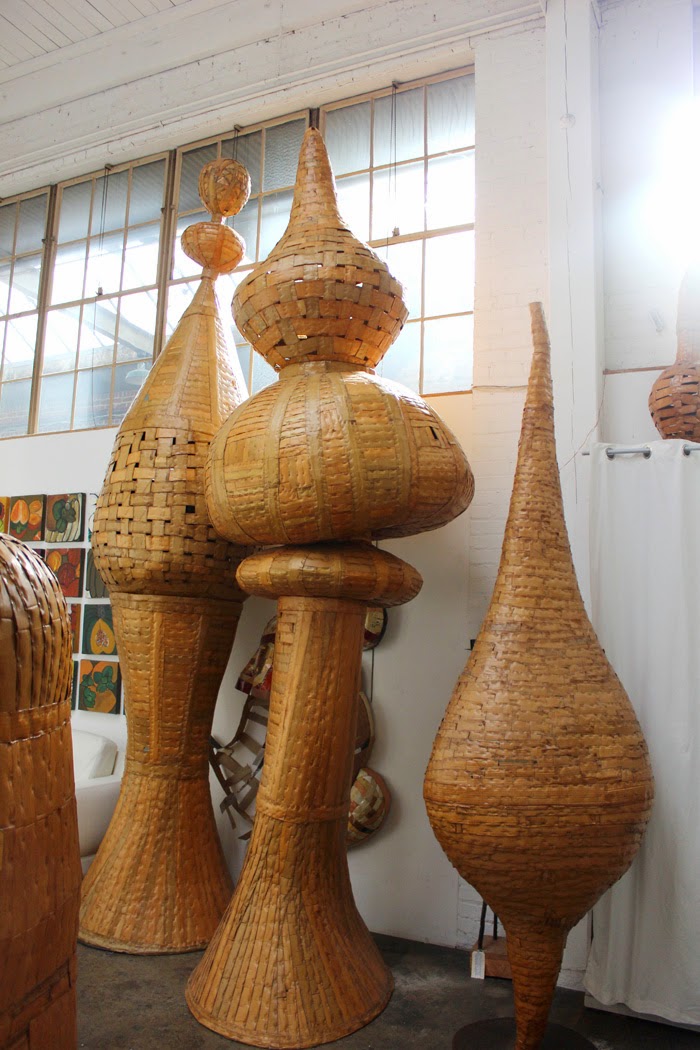 Where can we see your work in the Bay Area and beyond? 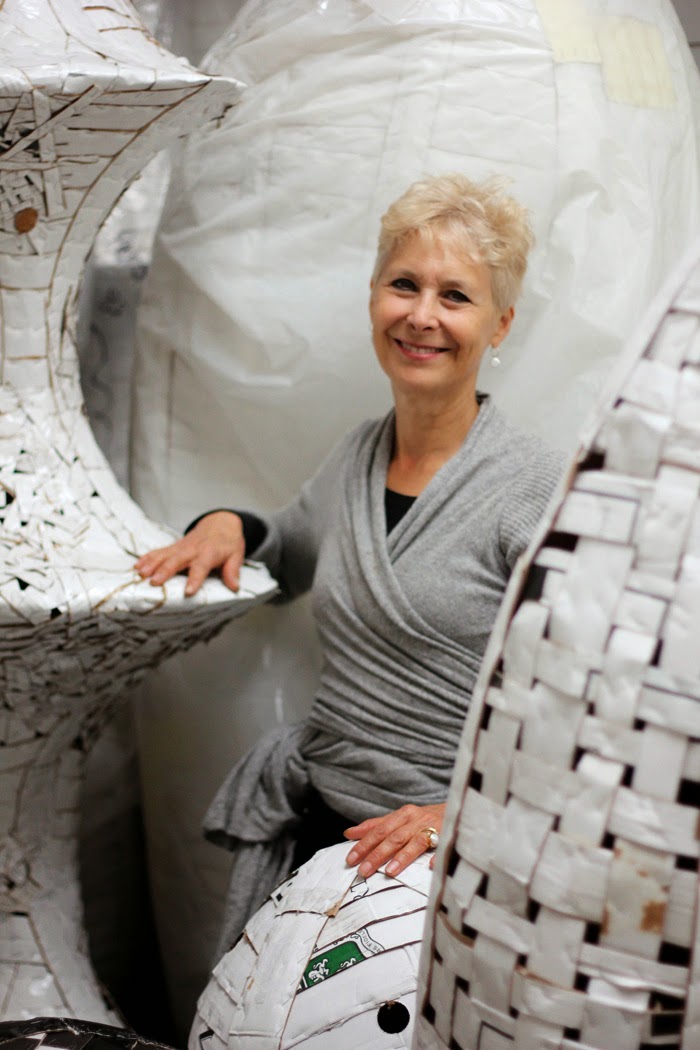